This vibrant, seasonal cocktail swaps fresh juice made from late summer blackberries for cranberry juice in a classic Cosmo.

When late summer arrives and plump, juicy blackberries are at their peak for sweetness, this Blackberry Cosmopolitan recipe will help you take full advantage of the season.

Blackberries provide a seamless switch from the familiar cranberry juice in a traditional Cosmo, working well with the orange from the Cointreau and the zesty notes of lemon. It’s a cocktail with natural sweetness that doesn’t overpower the taste buds while being both crisp and rich rather than effervescent and refreshing.

This one is best enjoyed on the patio or atop a picnic blanket with a charcuterie and cheese board or serve it as the welcome drink for a backyard cookout with friends.

What Is a Blackberry Cosmopolitan?

This cocktail combines vodka with blackberry juice muddled from fresh berries along with a twist of lemon juice and a touch of sweet orange from Cointreau. It’s served in a tumbler, making it easy for drinking while mingling at outdoor parties.

The classic Cosmo is known for its cranberry orange flavor. In the late 1960s Ocean Spray began a marketing campaign that promoted a series of cocktails using the brands cranberry juice and the buzz around the Cosmopolitan ensued.

With the help of bartenders in a few cities around the U.S. (depending on which story you read), the modern version of the Cosmo gained popularity in the 1980s and by the 1990s it became a sophisticated cocktail of choice in cities like New York.

This popularity was depicted through the drink’s regular appearance in the show, Sex and the City, staring Sarah Jessica Parker. While the traditional Ocean Spray recipe calls for Cranberry Juice Drink, vodka, and lime juice, the modern recipe includes Cointreau for that characteristic hint of orange that is balanced by 100 percent cranberry juice for a true, tart cranberry flavor.

Since then, the drink has become a starting point for new, often seasonal, variations. By substituting the cranberry juice with a different fruit juice, another type of Cosmopolitan is easily born.

Ingredients for a Blackberry Cosmopolitan

You’ll need vodka, Cointreau, a half cup of ripe blackberries, and fresh lemon juice to make this cocktail. Save a couple blackberries and a slice of lemon for the garnish.

This drink relies on the berries for most of its sweetness so be sure to use plump, very ripe berries. The Cointreau adds sweetness as well, but if the berries are too tart, between that and the lemon juice, you might end up with a drink that’s too sour to sip and enjoy. If tart berries are all you have, you can add a little simple syrup to the drink to balance out the flavors.

Berries that are very similar to blackberries in taste and juiciness can easily be substituted. If boysenberries, dewberries, olallieberries, or marionberries are more common in your area, feel free to use those in this drink.

Best Brand of Alcohol to Use

Quality spirits are important for any well-made cocktail, but when you are creating a mixed drink with some fruit juice and other ingredients, you have some wiggle-room for what to buy. It’s perfectly fine to save a little money versus when you are making a single-spirit drink like a martini which should really feature top-shelf spirits.

Middle-shelf options for vodka really work even better with drinks like the Blackberry Cosmopolitan because they tend to have milder flavors that allow the blackberry juice and orange from the Cointreau to shine.

Absolut Vodka has a smooth, mellow taste that allows the bold flavors of blackberry to stand out in this cocktail. It’s a high-quality, affordable mixing vodka for a variety of drinks.

Skyy Vodka is another lightly flavored vodka that works well in this drink. Its flavor is subtle and the smooth taste blends with the other ingredients in this Cosmo. It’s an affordable good-quality vodka.

The Simple Tumbler for Serving

This drink is meant for a casual, relaxing occasion. While you can serve it in a coupe or martini glass like a classic Cosmopolitan, it is much more inviting for relaxing on the back patio when served in a tumbler.

Any type of tumbler will do, but I prefer a squatty, shallow version that holds 5 to 6 ounces. A smaller or larger size is okay, too. Just keep in mind that the cocktail will be about 4 ounces, depending on how much juice is extracted from the berries, and it's served without ice. You want the glass to be big enough that it doesn’t splash out, but not so big that the cocktail is lost in it.

Garnish Options for a Blackberry Cosmo

A twist or slice of lemon along with one or two blackberries is the best garnish for this drink. Other options include 3 blackberries on a toothpick or a wedge of lemon on the side of the glass. 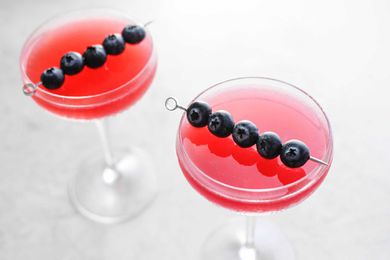 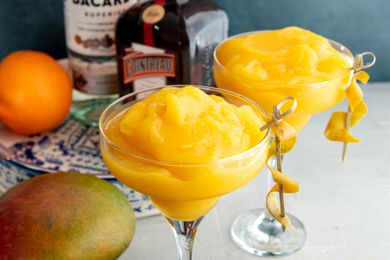 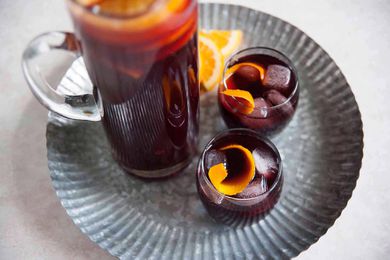 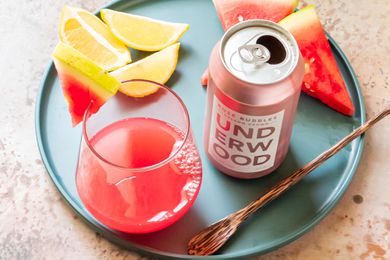 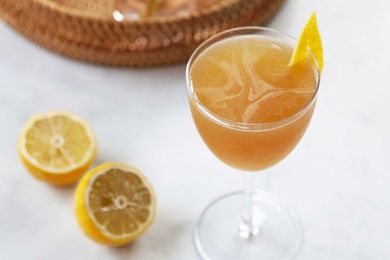