All About Cayenne Pepper

With its precise and fiery heat, cayenne pepper is a go-to for adding a little (or big) kick to everything from sauces to pilafs. Here’s how to get the most from it.

If a kitchen has just one spice bottle of ground, dried pepper around, it’s a safe bet it’s cayenne. Cayenne packs heat without a ton of its own flavor, making it an especially versatile ingredient.

Need a little kick? Use just a pinch. Want to make something fiery? Use way more.

What Is Cayenne Pepper?

Dried, ground cayenne pepper starts out as long, fresh red chilies (Capsicum annuum). They originated in South America. Mature cayenne peppers are about 2 to 5 inches long and typically harvested red, when they are hottest, then they are dried and finely ground.

Since it’s pretty uncommon to run across fresh cayenne peppers, in most instances you can assume a recipe is calling for dried, ground cayenne pepper. In addition to simply “cayenne,” you may see it called:

Cayenne doesn’t have a smoky or earthy a flavor as some other dried chiles do. Mostly, it’s hot and a little fruity, and that’s about it. This is an asset, not a drawback. Cayenne may be a power player in heat, but it works nicely with other flavors.

Fresh cayenne peppers have thin walls, which makes them not well-suited to shipping. But this characteristic makes them excellent for drying, and that’s why the cayenne you encounter in stores is almost always dried and ground.

How to Cook with Cayenne

A strategic dash of ground cayenne enlivens many dishes. It’s been popular in American cookery for years. Grab a pinch of cayenne when you want an underlying thread of heat in something rich, like macaroni and cheese from scratch. Or use a lot for a blast of straightforward heat, as in our Nashville hot chicken. A moderate amount of cayenne won’t crowd out other flavors in spice blends like rubs.

Technically, ground cayenne will last for years, but its potency fades as the months pass. I like to refresh it every year or so. If you notice your ground cayenne isn’t making much of a statement in your recipes, it might be time to by new tin or bottle.

You’ll see cayenne in all sorts of recipes and cuisines, from tandoori chicken to edgy desserts. Just as you’d guess, the amount of cayenne in a recipe will largely determine its spice level. Want more heat? Add more cayenne. Want less? Reduce it. The following recipes start with lots of cayenne and work down to just a hint of cayenne.

Where to Buy Cayenne Pepper

Since it’s a spice rack standard, you can get ground cayenne pepper at nearly any supermarket. Just look in the spice aisle. For freshness, buy it from a purveyor that sells it in bulk or has a good turnover. Shopping online? We’re always fans of The Spice House.

Unless you really tear through your cayenne supply, it’s a good idea to buy it in small amounts; it’s potent, and if you only use it in 1/4 or 1/8 teaspoon amounts, it’ll take a while to use up a jar.

For recipes where you’re only using a pinch or a small fraction of a teaspoon, a few dashes of red pepper sauce (such as Tabasco) is a fine substitute for ground cayenne. You can also use dried red pepper flakes, which are coarser and can be milder.

If you have fresh hot peppers around, mince them up and take a taste to see how potent they are. In most dishes except for dry spice blends, a little fresh minced pepper works well, too.

How to Make Your Own Cayenne Pepper

The best way to make your own cayenne pepper is to grow your own cayenne peppers. They’ll thrive in a garden in a hot climate or in warm summer seasons. You can also grow them in containers. After harvesting the ripe red peppers, dry them in a dehydrator or oven, or hang them to air-dry (the latter works best in a dry climate).

Wear gloves when handling the chilies. Remove the seeds, if you like. They can be difficult to grind finely (and, despite the popular myth, the majority of the heat resides in the ribs, not the seeds). Then grind them in a spice grinder or blender. It’s not a bad idea to wear a face mask and eye protection when grinding, since the pulverized pepper can irritate eyes and spark coughing. Or just cover the grinder with a damp kitchen towel.

Pulverize until fine but wait a few minutes before opening the grinder to allow the spicy dust to settle. Transfer to a tightly covered jar and use within a year for the most vibrant flavor. 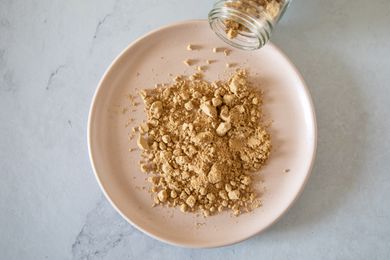