Dessert’s always on deck when you have an unbaked pie in the freezer! Here’s how to prep and freeze a pie so it's ready to bake later on.

Every time I make a pie, it feels like both a privilege and an undertaking. I love baking pie, but it takes a good chunk of time.

That’s why freezing an unbaked pie to bake when you need it can be such a boon. You break the steps up into two distinct and manageable chunks, and have a glorious, freshly baked dessert to show for it.

I’ve frozen unbaked pies before, but hadn’t in a while, so I made, froze, and baked our Old Fashioned Peach Pie as a refresher. I’d never have guessed it was frozen if I didn’t know myself. I felt like I’d outwitted someone! Here’s what you need to know to try it yourself.

What Kinds of Pies Can You Freeze?

When it comes to freezing unbaked pies, stick with fruit pies. Nearly all straight-up fruit pies, such as cherry, blackberry, and apple, hold up great in the freezer. Some custard fruit pies, like our Rhubarb Custard Pie, also freeze well. It doesn’t matter if they have a lattice top, a crumb topping, a double crust, or no top crust at all: freeze away!

Pies you should not freeze: Do not freeze fruit pies with sour cream (like Sour Cream Apple Pie), as sour cream can curdle in the freezer. Meringue pies and cream pies also don’t freeze well, baked or unbaked. Same goes for most custard pies, with the exception of baked pecan and pumpkin pies, which freeze wonderfully! They’re also a lot easier to freeze after baking.

How long frozen pies last in the freezer: You can freeze unbaked pies up to two months. After that, you’re flirting with freezer burn. Pies with a top crust may be a little more protected than pies with their fruity insides on display. To be honest, I’ve never had a pie in the freezer longer than two months, so I can’t tell you for sure.

NOTE: Use a ceramic or metal pie plate. Glass ones, such as Pyrex, are brittle and may shatter because of the drastic temperature change from the freezer to hot oven.

How to Bake a Frozen Pie

No thawing needed! Pop that pie right from the freezer into your hot oven.

A lot of sources say to add 10 to 20 minutes to the baking time, but when I froze and baked our peach pie recipe, it took 30 minutes on top of the suggested baking time of 1 hour for an unbaked pie, so be patient. You pie may need even more extra time than mine did.

Add a few teaspoons of acid, such as lemon juice or apple cider vinegar, to peach, apple, and pear pies to prevent the uncooked fruit from browning in the freezer. (Recipes for these kinds of pies usually call for lemon juice in the first place, fortunately.)

If you have a baking stone, use it. Put pie and foil-lined baking sheet on the stone, which will hold more heat and give your frozen pie a boost, helping to prevent a soggy bottom crust. 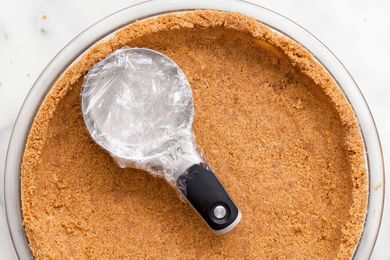 The Best Pie Pans to Evenly Bake Your Picture-Perfect Pastries