"Somehow, the longing for my own individuality within such a large family became distilled into one wish: I really wanted to have my own birthday cake."

July is birthday month in my family. My grandparents, my mother, and me were all born within a month of each other; and then, in 2016, my own daughter was born, just a day after the Fourth of July. I went into labor in the dying light of the fireworks, the night suddenly still, as if waiting for my girl. She was set to be induced on my birthday, but we joke that she arrived early, with her signature stubbornness, so that she could claim a birthday all to herself. I don’t blame her. Growing up, I wished that I could have a birthday to myself too.

When I was young, every birthday was the same. We gathered at my grandparents’ house to celebrate the four July birthdays (technically, my grandmother was born in June, but she gets lumped in with the July babies), unfolding card tables and chairs to fit the entire extended clan. There was so much food: vermicelli heaped with scallion oil, egg rolls straight from the fryer, chicken curries, my favorite shrimp and sweet potato fritters, and, above all, one giant bakery cake from Publix, always brandished with great fanfare. Usually, it was a white cake topped with whipped buttercream, my grandfather’s favorite, and festooned with dozens of colorful roses, an homage to my grandmother, whose name means “flower.” The poor cake decorator squeezed every single name onto the surface of the cake. You could see her flagging around the last one, drooping the final curlicue letters onto the edge, where the frosted roses bloomed. We sang “Happy Birthday” one time, trailing everyone’s names together into one smushed title, with my name at the tail end like a caboose.

Those birthdays were beautiful. Once, my artist uncle made me a three-foot-tall poster with my favorite Disney princess (Belle) on it. Another time, my grandmother gifted me a gorgeous jade bracelet that she carried in a fabric pouch around her waist, all the way from Vietnam. I remember feeling cherished beyond comparison, nestled so safely within a family that, for all their ancient squabbles, seemed to prefer each other above all others.

But those birthdays never belonged to just me. I envied my cousins and their birthdays—they got to choose their own cake. How everyone crowded them, singing just their name. They seemed more special on their birthdays, with the spotlight of love shining on them alone. Somehow, the longing for my own individuality within such a large family became distilled into one wish: I really wanted to have my own birthday cake.

I never articulated this aloud—it would have felt like a betrayal to my family at worst, and an excessive inconvenience at least—but it was a secret wish I held into adulthood. Hearing this, my then-boyfriend, now husband brought home a small cheesecake one year, my favorite, and added a single, yellow-and-white striped candle. In our century-old apartment by the railroad track in Chicago, he sang a birthday song just for me. I felt he saw me as myself, and for myself. As special.

"Sometimes, the nicest gifts of love are the invisible ones."

On my daughter’s first birthday, we threw a big bash at the community center down the street. There were balloons and streamers, and a cake that could feed 30 people. In pictures from the party, I’m holding her in my arms in front of the buffet table. My husband and I are smiling at the camera, so very excited to have made it past one year of raising our daughter, but she’s staring down at the cake with the eagerness of a person who knows that a sugary heaven lies just within reach. We didn’t do a formal cake smash, but suffice it to say, she did a fair amount of smashing that day. When we bathed her afterwards, tiny yellow crumbs fell into the bathwater. I had a weirdly animalistic instinct to lick the chocolate frosting off her round little cheeks.

Afterwards, soaked in the glow of the party, my husband and I sat in bed revisiting our favorite moments. Then he said, “Okay, now we have to think about your cake.”

I yawned. “Let’s just skip it. We have enough leftover cake, right?”

He sat up, aghast. “We can’t skip your birthday cake. That would be like skipping your birthday. And we are not doing that.”

Sometimes, it’s very easy to see why I married that man.

Since our daughter’s first birthday, our family has committed to two cakes every July. We could just as easily share a cake or go with a cake and cookies. But instead, encouraged by my husband, we make it a point to serve two different cakes. I usually go with a cheesecake, or, one inspired year, a cookie cake that nearly covered our kitchen table. Five years later, my daughter still likes chocolate frosting best; even more, she loves a Graeter’s ice cream cake with layers of cookie dough ice cream and whipped cream topping. Sometimes, I bake her cake. When she was four, she wanted a Little Mermaid themed cake, so I bought tiny figurines of Ariel, Ursula, and even the seagull Scuttle, and learned how to create frosted ombre waves. She didn’t notice the bare patches on the side of the cake, from when I ran out of frosting, or how the cake was just a little lopsided. But she gushed over it with such gusto that, despite my griping, I told her I’d bake her a cake anytime she wanted.

“Aren’t we lucky to get two cakes,” I whispered in her ear. Not listening, she crammed another forkful into her mouth. She won’t know any different, so to her, two cakes doesn’t represent luck at all. It’s just the way life is. The start of July will always mean two cakes. Sometimes, the nicest gifts of love are the invisible ones.

Afterwards, the fridge is full of cake. We’ll have cake for breakfast, and invite friends over to share it, packing slices into Tupperware for them to take home. We freeze some, and then inevitably forget about it. But every time I see the two cakes, sitting side by side, I’m reminded of the ways our family has created its own tradition. A little excessive, sure, but baked with meaning through and through. And each year, through the sugar highs and the endless crumbs, the frosting that still makes it into my daughter’s hair, the overabundance of it all, I look across the table at my husband and remember again how very sweet our life is. 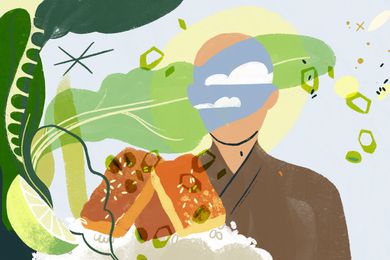 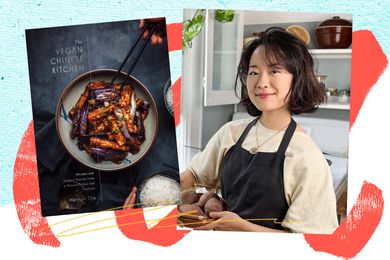 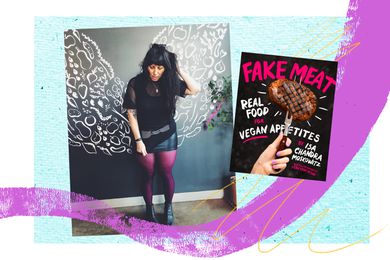 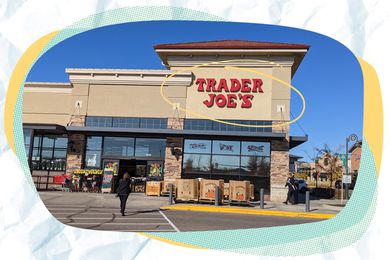 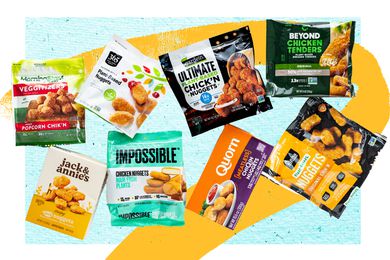 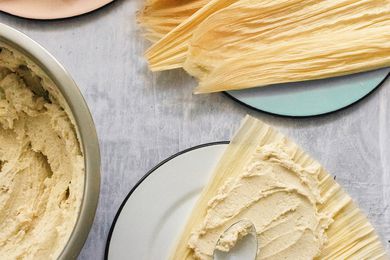 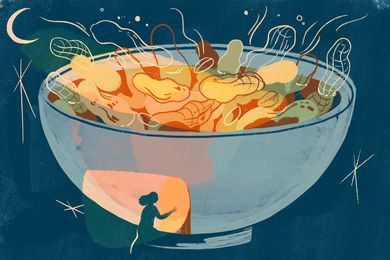 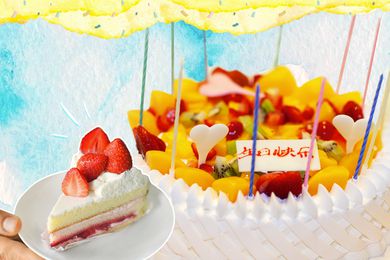 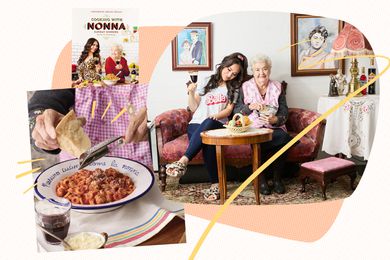 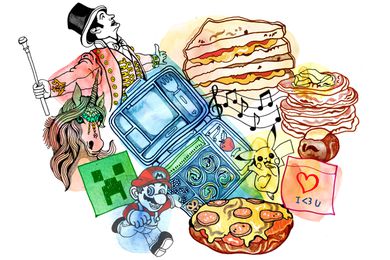 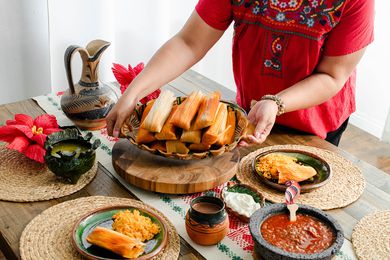 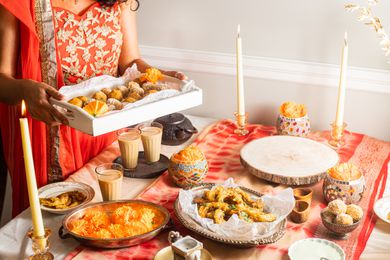 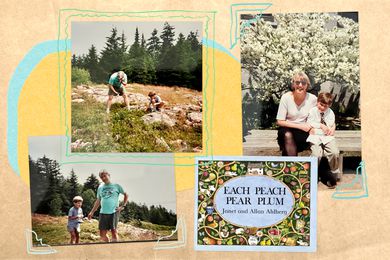 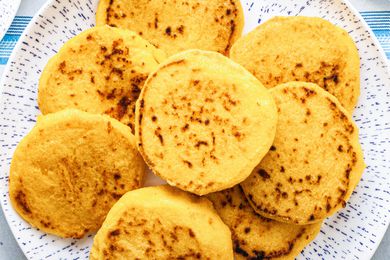