Piña colada pie is a festive summertime cream pie recipe with an easy coconut cookie crust, coconut custard with a touch of rum, a layer of sweet-tart pineapple, and a mound of whipped cream. Top with toasted coconut and it’s a party in a pie pan.

Let’s face it: the piña colada is a dessert masquerading as a cocktail. While I love the creamy, sweet drink, it often has me wishing I had a piece of cake or pie instead. There’s something about drinking your dessert that just isn’t quite as satisfying.

Enter the piña colada pie. I took all of my favorite things about coconut cream pie and added all of my favorite things about the tropical cocktail to make one truly memorable dessert. The easy cookie crust is made using vanilla wafer crumbs and coconut for a crunchy base. The filling is a classic coconut custard, made primarily with coconut milk and spiked with a little coconut rum, and a small mountain of coconut-infused whipped cream adorns the top. A thin but flavorful layer of pineapple with lime and a little more rum is sandwiched in between.

This is a dessert that takes some planning ahead, but there’s very little actual hands-on time. The real key to success is leaving plenty of time for chilling, but that also makes it an ideal make-ahead dessert. Serve it for a weekend get-together and watch everyone’s faces light up.

Homemade custards and pastry creams can be intimidating, but this coconut filling is forgivingly easy—no tempering required. Here are a few tips and tricks to guarantee your success:

I considered topping this pie with coconut whipped cream for a coconut bonanza, but the texture isn’t as light and fluffy as you want for a classic cream pie. I also discovered that there is such a thing as too much coconut. Instead, I added a dose of coconut cream to the whipping cream. It adds a little extra coconut flavor and richness while keeping the topping light and airy. It’s optional but highly recommended.

Planning Ahead for Your Piña Colada Pie

The key to any successful cream pie is timing. In general, allow more time than you think you’ll need. Allowing components to cool and properly chill means a crisp crust, set fillings, and fluffy topping. There’s really no way to rush through this—trust me and allow at least eight hours. Don’t worry, all but about 30 minutes are hands-off chill time.

Here’s a timeline to help with planning:

Piña coladas are often garnished with an array of fruit and decorations, so feel free to make your pie extra festive. A simple topping of toasted coconut makes for a lovely pie or go a step further and top each slice with a maraschino cherry or even fancy cocktail cherries. Mini umbrellas are a fun touch, too.

How to Store Pina Colada Pie

Store the whole pie in the fridge, uncovered, for up to two days before serving. While it’ll technically keep for longer, it will be at its best in the first day or two (after chilling time). If you have some strong-smelling items in your fridge, you may want to cover it since the whipped cream can absorb some odors. Store a cut pie covered with a piece of parchment or waxed paper pressed against the cut layers. In total, the pie will keep for up to three days.

For the coconut custard

For the pineapple layer

For the whipped cream 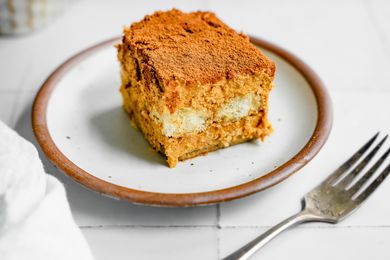 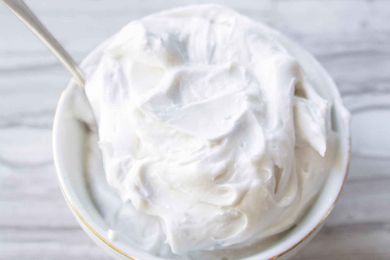 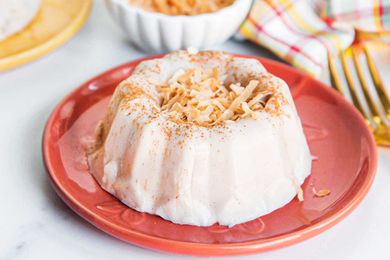