Have you ever tried making Indian biryani at home? There's something magical that happens when you combine chicken, rice, a number of spices and you infuse it with cardamom pods, saffron, and top the whole thing with fried onions.

It was a modest neighborhood with 2 bedroom quarters, built in a row, one wall shared between two houses. Far from quiet, narrow streets separated two adjacent rows of houses.

If not at school, we kids were always on that street, kicking a soccer ball, hitting a four in cricket or flying kites. Come dusk, a gentle wind would blow and bring with it the aromas drifting out of the kitchens.

Aunty Anwari lived in the house right across the street from ours, and the days we would smell biryani were the days we’d be eating dinner at her place. No invitation necessary.

Hers was the first biryani I ever tasted as a kid and, to date, there hasn’t been any better.

Biryani (pronounced bir-ja-ni), or biriyani, is a layered rice dish with its roots in the Mughal Dynasty in India. Mughals came to India in the 1500s and brought with them their own culture, language, and cuisine. When blended with those of India, this gave birth to many poetic things, biryani being one of them.

Born in the royal kitchens of the Mughal India, biryani was developed as an effort to blend flavors of spicy Indian rice dishes to that of the Persian rice dish called pilaf.

South India has great agricultural land for rice, the main ingredient used in biryani, so south Indians also slowly mastered the dish even further and came up with several varieties of their own.

Out of all these, the most popular variety (in my humble opinion!) is Hyderabadi Dum Biryani, in which the main components of the dish—rice, meat and vegetables, spices and garnishes—are prepared separately and then put together in a layered manner, tightly packed, and then slow cooked to perfection.

Dum is a Hindi name for pressure and that is the technique mainly involved in cooking this Biryani.

The recipe I am sharing today is a simpler, more approachable take on a traditional Hyderabadi Chicken Biryani. The technique and the ingredient list might look overwhelming but trust me, as long as you have all the ingredients in front of you, the hard part is already over.

This makes for a great dish if you want to please a crowd. It can be layered and refrigerated for up to a day and popped in the oven right before the guests arrive. Serve with a side of raita (a simple yogurt dressing) and it’s a complete meal.

It is okay to skip one of the varieties of cardamom pods if you cannot find both for the rice.

For the saffron milk:

For the fried onions:

To assemble the biryani: 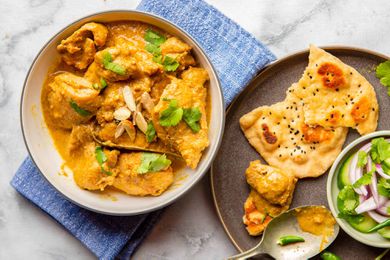 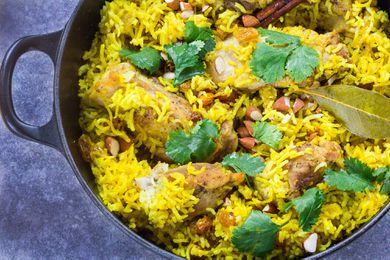 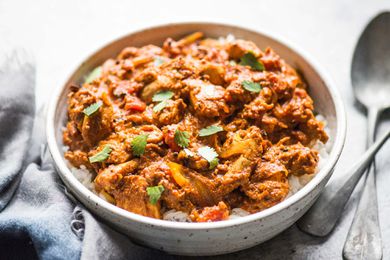 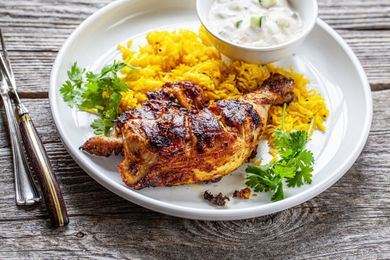 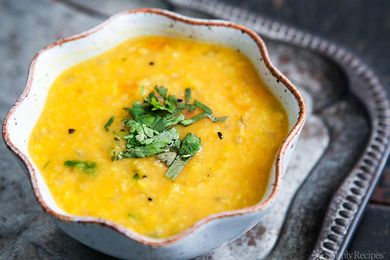