Years ago when I spent a summer studying Spanish in Cuernavaca, Mexico, my Mexican teacher told me that it was much easier to pronounce the language properly if you smiled as you spoke it.

She was right! Good thing Mexican food is so delicioso, because just thinking about dishes like this pozole makes me smile.

It's somewhat of a feast, pozole. I guess you could make smaller batches, but since you have to cook it for several hours, it just makes sense to make a large amount, and then have lots of friends over with whom to enjoy it.

Pozole (or posole) is a traditional soup in Mexico, often served Christmas eve, and in many parts of the country on Thursdays and Saturdays all year round.

This pozole rojo, or "red" pozole, is made with pork shoulder or shanks, red chiles, and lots of hominy corn.

I made this for my parents, and they loved it. Mom told me she hadn't had pozole since she was a kid in Tucson. Lots of smiley faces around the table tonight.

Typically just the simple soup with pork and hominy is served, and the add-ins, or garnishes are set at the table for all to pick and put in their soup as they wish.

How to Serve Pozole

The soup itself should be rather thin, or brothy, because you are going to load it up quickly with shredded cabbage, thinly sliced radishes, chopped avocados, cilantro, onions, and wedges of lime.

More hot sauce or chiles can be added for more heat. Pozole is all about the garnishes. So good! Many thanks to my good friend Arturo from Guerrero Mexico for showing me how to make this wonderful soup.

How to Store or Freeze Pozole

This recipe makes enough for a large crowd with plenty of leftovers! The leftovers will keep, refrigerated, for about a week or can be frozen for up to three months.

To freeze, transfer the pozole to freezer containers or bags with as little air as possible to prevent freezer burn. Thaw overnight in the fridge, and warm over low heat on the stovetop.

Prep Time 30 mins
Cook Time 3 hrs
Total Time 3 hrs 30 mins
Servings 12 servings
We haven't made this in a slow cooker, but I'm guessing that step 6 could easily be done in a slow cooker. Tostadas are crispy fried corn tortillas. They are sold packaged and can often be found in the same section of your grocery store as fresh tortillas, or can be found at Mexican markets. You can make your own by frying stale corn tortillas (or tortillas that have dried out a bit in a warm oven), in hot vegetable oil until stiff.

Garnishes (can prep while pozole is cooking):

Vegetarian posole from Heidi of 101 Cookbooks

Posole with roasted green chiles from Use Real Butter 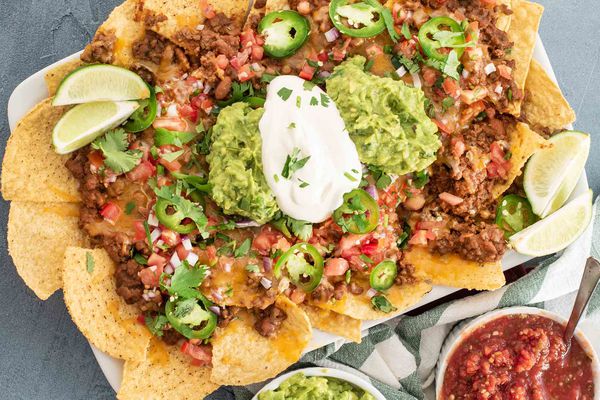