Making a simple and flavorful watercress soup is easy. This recipe stars bunches of fresh watercress, a splash of white wine, and some potatoes to fill it out.

One of my earliest memories is of my father taking the family out on excursions to Antelope Valley, about an hour and a half outside of Los Angeles, where we lived.

We used to go out there to pick pears, look at the jackrabbits, and just wander around the rugged terrain.

There was a creek that ran along where we would hike, and in this creek, grew watercress. It was rather miraculous to my six-year-old brain that we could find what we often ate for salad, growing over boulders, in and around tumbling and churning creek water.

"Well, that's why they call it 'water' cress," explained my dad.

We loved it then and still do now, though it seems to be more difficult to find in the market these days.

Have you ever had watercress? The real kind with thick stems and a spicy bite?

They sell some aquaculture baby watercress at Whole Foods, but I refuse to buy it. Because to me, it's not the real stuff. Watercress shouldn't be delicate; it should pack a punch.

It's great in a salad with a hot bacon dressing. It also makes a terrific soup. This watercress soup has a potato base and is topped with just a little sour cream.

Where to Find Watercress

If you have trouble finding watercress in your regular market, try Indian or East Asian grocery stores.

Check out local farmers markets when watercress is in season (usually April through September in the Northern Hemisphere).

You can also grow it yourself from seed, but be sure to trim before the plant begins to flower and turn bitter.

Or forage it—but only if you are confident you know how to identify the plant. Also, make sure the nearby water is very pristine. Don’t harvest it if you suspect there might be runoff or contamination.

Watercress is related to mustard greens. It grows wild in running water year-round. Look for crisp, dark green leaves without any blemishes. If you see any flowers, it means the watercress will be bitter.

Cress may look like watercress but is a different plant. It grows in soil and is a more delicate with thinner stems, more akin to baby watercress.

How to Prep Watercress

If you're preparing watercress for a salad, you'll want to trim off the stems. For this soup, however, include the stems. Be sure to wash the greens a couple of times in a basin or sink full of cold water. Keep washing until you don't see any more dirt. Remove and discard any limp or yellowing stems.

How to Store and Reheat Watercress Soup

Watercress soup can be stored in the refrigerator for three to five days. Just be sure to leave out the sour cream until serving.

It can also be frozen (sans sour cream) for up to three months in an airtight container. Defrost overnight in the fridge. Then, gently reheat in a saucepan until heated through.

Breads and Rolls to Pair With Watercress Soup

Watercress can often be found in the herb section of the grocery store. The bunches should be thick-stemmed, and the leaves should have a strong, peppery bite to them. The delicate, thin-stemmed baby watercress that some markets carry is not appropriate for this soup. 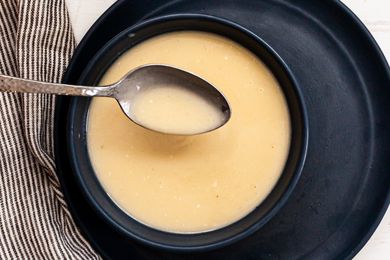 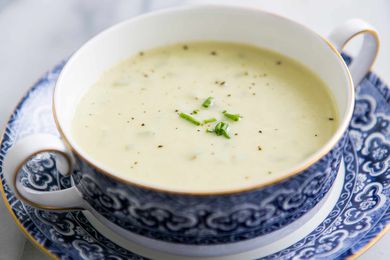 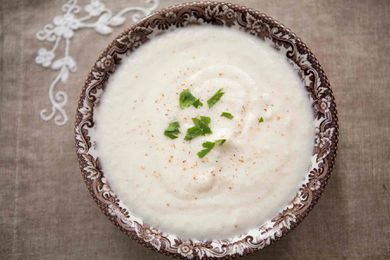 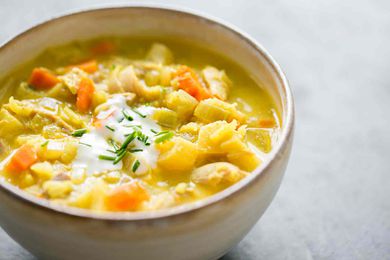 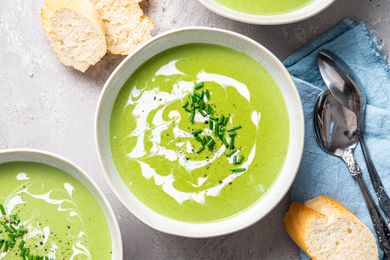