When I want something warm and comforting, I make biscuits and gravy. It feels like a hug or a fluffy blanket.

These are quick and easy cream biscuits. There is no need to carefully cut butter or shortening into the flour. You don’t even have to chill the biscuits before baking them.

The biscuits are topped with a vegetarian mushroom gravy that is luscious, creamy, and delicious without being too rich and heavy. Traditionally, the gravy is made with crumbled sausage; this recipe imitates that flavor by calling for seasonings typically found in sausage: crushed red pepper flakes, fennel, and fresh thyme.

Vegetarian biscuits and gravy are the ultimate indulgence and are only made better by sharing them with family or friends. If you start the gravy while the biscuits bake, you can have an easy meal on the table in about 30 minutes!

I love a good, buttery, flaky biscuit. However, I also like that this easy cream biscuit comes together so quickly. The inside is wonderfully moist, and the outside is just a bit crisp.

These biscuits are made with plenty of fresh thyme. You want to see little bits of thyme in the biscuit so don’t mince the herb into teeny tiny pieces. The herbs make the biscuits extra special, but they'll be wonderful without. The choice is yours.

The most important thing to remember is not to overwork the dough. Rather than kneading the dough, use your hands to gather the dough together and shape it into a flat circle—the dry bits will automatically come together.

The dough will be very sticky so make sure your kitchen counter and your cutter are generously floured. Once you cut out 3 biscuits, gently gather the scraps to cut out a few more biscuits. You’ll get 6 in total. The second set may not rise as high as the first set, but that’s okay.

A Few Words About Mushrooms

This recipe calls for a mix of cremini and white button mushrooms. Feel free to use whatever mushrooms you’d like. Shiitake and oyster mushrooms would work well.

When buying mushrooms, look for ones that are firm to the touch. Avoid mushrooms that are mushy, damp, or dried out.

There are a couple of ways to clean the mushrooms:

Make sure the mushrooms are dried well after cleaning and be sure the skillet is nice and hot. Cook the mushrooms before adding the rest of the ingredients to get good browning and to really bring out the flavor. Stir them frequently so they brown evenly.

How to Clean and Prep Mushrooms for Cooking
READ MORE:

Making the gravy may be the trickiest part of this recipe, but if something goes wrong, there are ways to save it.

Baby spinach is added to the gravy for a bit of color. Plus, I think it makes it a complete meal—no need to make a veggie side (although this would be delicious.)

You can add other vegetables you like to the gravy. Vegetables that take longer to cook like carrots and broccoli should be cooked until tender-crisp before adding to the gravy.

Looking for a vegan version? Here is a recipe for wonderful vegan biscuits. To make the gravy, use equal amounts of vegan butter instead of butter, and use your favorite plant-based milk instead of whole milk.

The biscuits taste best on the first day, soon after they come out of the oven. That said, they are still delicious the next day when reheated in a 350°F oven for about 7 minutes. 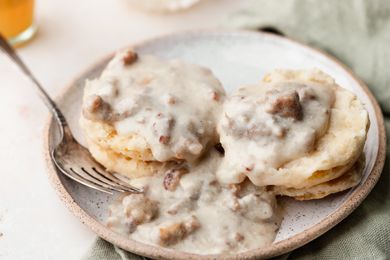 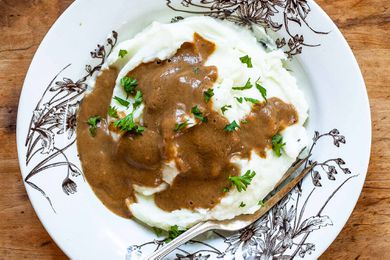 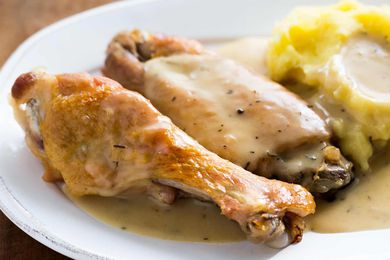 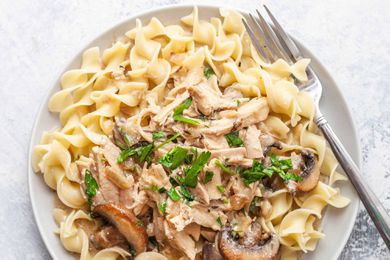 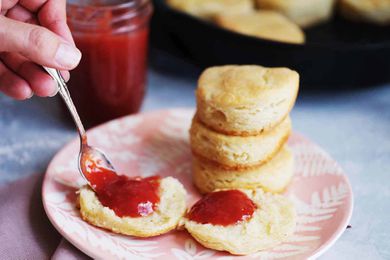